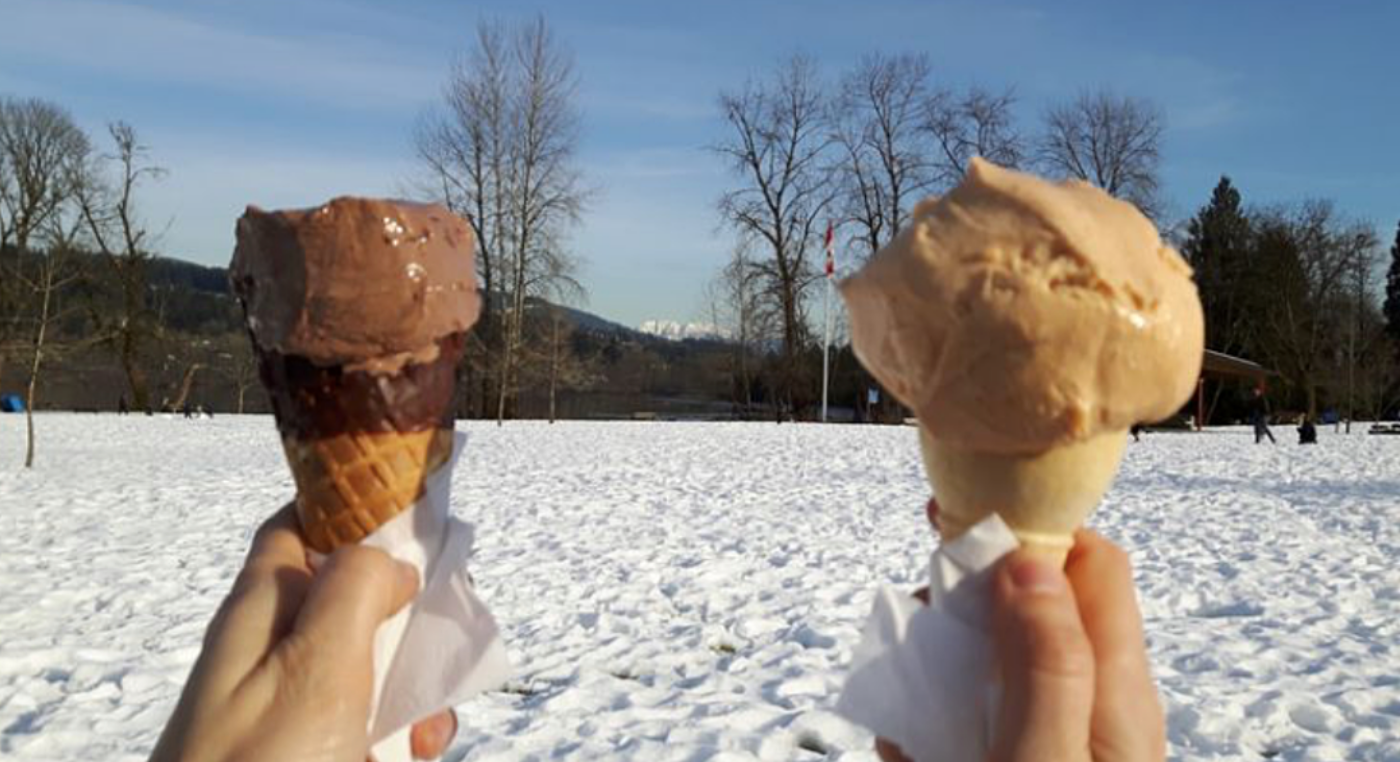 Depending on where you are in the country, winter could be anything from a snow blizzard to just cooler than average temperatures.

No matter where you are or how cold it is, you always have that student who lets you know, “It’s freezing!”.

Combine that with a national, year-round love of ice cream, toss in a little trivia and a giant virtual thermometer, and you have our special winter game for your students!

Use this youth group game followed by a quick lesson to enjoy some “cool” fun!

Bottom Line: You never know how a small, simple act can demonstrate the love of Jesus to others!

The length will depend on how much space you have and how many students are playing.

Make it long enough so that if all your students were standing in two single-file lines, they would be on the line.

Then add four more lines between each of those.

Use the marker to write on the perpendicular lines the temperatures.

Tell them you are going to be reading trivia questions related to ice cream.

If the question has multiple choice, they will raise one hand for “A.,” two hands for “B.,” curve both arms to make a “C” for “C.,” and have both arms at their side sticking straight down for “D.”

If the questions are a true/false question, they will stick their arms straight out to their sides for “T” or “true.”

They will only stick their left arm straight out for “F” or “false.”

If they get a question correct, they step forward one line.

If they get a question incorrect, they step backward one line.

If they are at the starting line or boiling point, the stay where they are if they get an answer wrong.

If more than one student makes it to the freezing point, we have a special tie-breaker planned.

No digital devices may be used to search for answers during this game. Either you know it, or you guess.

After explaining the how to play the game, begin!

1. Ben and Jerry’s recommends storing ice cream at this temperature to keep it solid and perfectly frozen. (C)

2. Graeter’s Ice Cream is still made in a small-batch, French pot process in Cincinnati, Ohio. What size are the batches? (A)

3. Irv and Irma Robbins invented the flavor “Pralines and Cream” for Baskin Robbins while they were at home enjoying pralines that were souvenirs from their trip to (D)

4. True or False, although Blue Bell Creameries in Texas are known now for their ice cream, they started off making butter. (TRUE)

5. The most popular flavor from Graeter’s Ice Cream is: (B)

6. If you visit a Ben and Jerry’s Scoop Shop, what temperature range do they keep their ice cream in so that it is the perfect scoop-able softness, while still being frozen? (A)

8. In America, which month is the National Ice Cream Month? (C)

9. Blue Bell Ice Cream is based out of which Texas city? (D)

Give everyone who made it to the freezing line a sheet of paper and a pen.

If only one person did, you could have them play this tiebreaker against one of your leaders for fun.

You can also have everyone play this just for fun to see how well they would do.

They are to number from 1-10, with one being the most popular and 10, the least in this list.

They get 60 seconds to list the ten most popular ice cream flavors in America.

For every flavor they have that matches one on the list, they get 1 point.

For every flavor they have in the correct order, they get five bonus points.

The person with the most points – wins!

Still, have a tie? End it with good old rock, paper, scissors.

Close out the game with ice cream cones for everyone.

Say: In that game, much of what we did centered around a sweet treat that we enjoy the most when it is hot outside.

To be honest, a simple ice cream cone is a pretty small and cheap treat.

But when was the last time you bought one for someone else?

Or when was the last time you offered someone else something that you had, whether it was ice cream or hot chocolate or a bottle of water?

Matthew, one of Jesus’ apostles and a former tax collector, wrote about something Jesus described regarding helping others.

“Then the King will say to those on his right, ‘Come, you who are blessed by my Father, inherit the Kingdom prepared for you from the creation of the world. For I was hungry, and you fed me. I was thirsty, and you gave me a drink. I was a stranger, and you invited me into your home. I was naked, and you gave me clothing. I was sick, and you cared for me. I was in prison, and you visited me.’

“And the King will say, ‘I tell you the truth when you did it to one of the least of these my brothers and sisters, you were doing it to me!’

Ice cream is a simple treat.

The next time you are hungry for some, invite a friend to join you.

And maybe offer to pay instead of your parents – maybe even pay for a treat for your parents!

Or, since it’s winter, maybe you make a mug of hot chocolate for your brother or sister, mom or dad when you are making one for yourself.

You never know how a small, simple act can be a sweet treat offering someone else a taste of the love of Jesus!

YOUTH GROUP GAME ON LOVING OTHERS