I walked into the youth room where I usually find students playing basketball or ultimate frisbee and found something a little different.

If you just looked with me at the motions the boys were going through, it resembled Ultimate Frisbee.

However, they didn’t have a frisbee. What did they have?! Yes, they had…a rubber chicken!

I was reminded once again that when students – especially the boys – want to play a game, they’ll use whatever they can get their hands on to have some fun.

And this got me thinking…

How else could this rubber chicken be used? Below are my suggestions.

Use these rubber chicken games as an opener to the below devotion on “Wisdom” or “Making Good Choices” based on 2 Timothy 1:7-8.

(Scroll down below the list of games to view the devotion).

One of my go-to resources for games is Les Christie’s book: Best-Ever Games.

However, it is not just the game ideas that make this book so valuable.

It is his sections on a history of games, philosophy of games, theology of fun and games, and worst games ever.

He’ll help you think through games and be better at leading them in the process. The book is filled with side bar “Gaming Tips”. I’m using one of them here: “How to modify supplies.”

1. Rubber Chicken(s) You should be able to pick up a rubber chicken easily enough. A quick search on Amazon leads to some good sources of anything from one 20-inch version to a dozen 8-inch versions and more! And…you just might be able to ask around and find that your children’s pastor, senior pastor or families in your ministry have one or more you can borrow. (Just be prepared to pay to replace it if-I mean when-it gets damaged.

2. (Optional) Chicken Mask or Costume Picking up a chicken mask or costume for someone to wear either as the mascot for your rubber chicken games night or to signal that you’re going to be playing a rubber chicken game in youth group this week can be a fun bonus.

Pick out which games you are going to play and be sure you are familiar with the normal rules.

In our game(s) today, we replaced the object you normally would use with a rubber chicken.

That may have been weird for someone of you.

It was obviously fun for others of you. When someone calls another person “chicken,” what do they mean?

Exactly. They are saying that person is scared for some reason, usually because they won’t do what the other person is asking or challenging them to do.

In life, you may actually be using wisdom to refuse to do what is asked and be called a “chicken.”

However, when it comes to our faith, there are times we can be “chicken” as well, scared or nervous to let others know about the Jesus whom we follow.

He had to remind Timothy about the kind of life we are supposed to live and how to avoid being a “chicken” with our faith.

“For God has not given us a spirit of fear and timidity, but of power, love and self-discipline. So never be ashamed to tell others about our Lord.” (2 Timothy 1:7-8, NLT)

Just like it wasn’t easy to play these games with the rubber chicken, it’s not going to always be easy to share with others about Jesus in your words, attitude and actions.

However, as Paul reminds us, God wants us to trust in His power, loving others with a boldness and courage to help them know about Jesus.

It’s fun to play with a rubber chicken. But no one in life really wants to be a chicken.

Remember that the same thing goes with our faith.

Ask God to help remind you that He has given you “a spirit of power, love and self-discipline” so that you can tell others about Jesus without being ashamed!

If you liked this game, check out this… 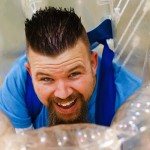 Mike is the Middle School Pastor at Mount Pleasant Christian Church in Greenwood, Indiana, where he oversees their ministries for 5th-8th graders. He’s been in full-time youth ministry over 16 years.