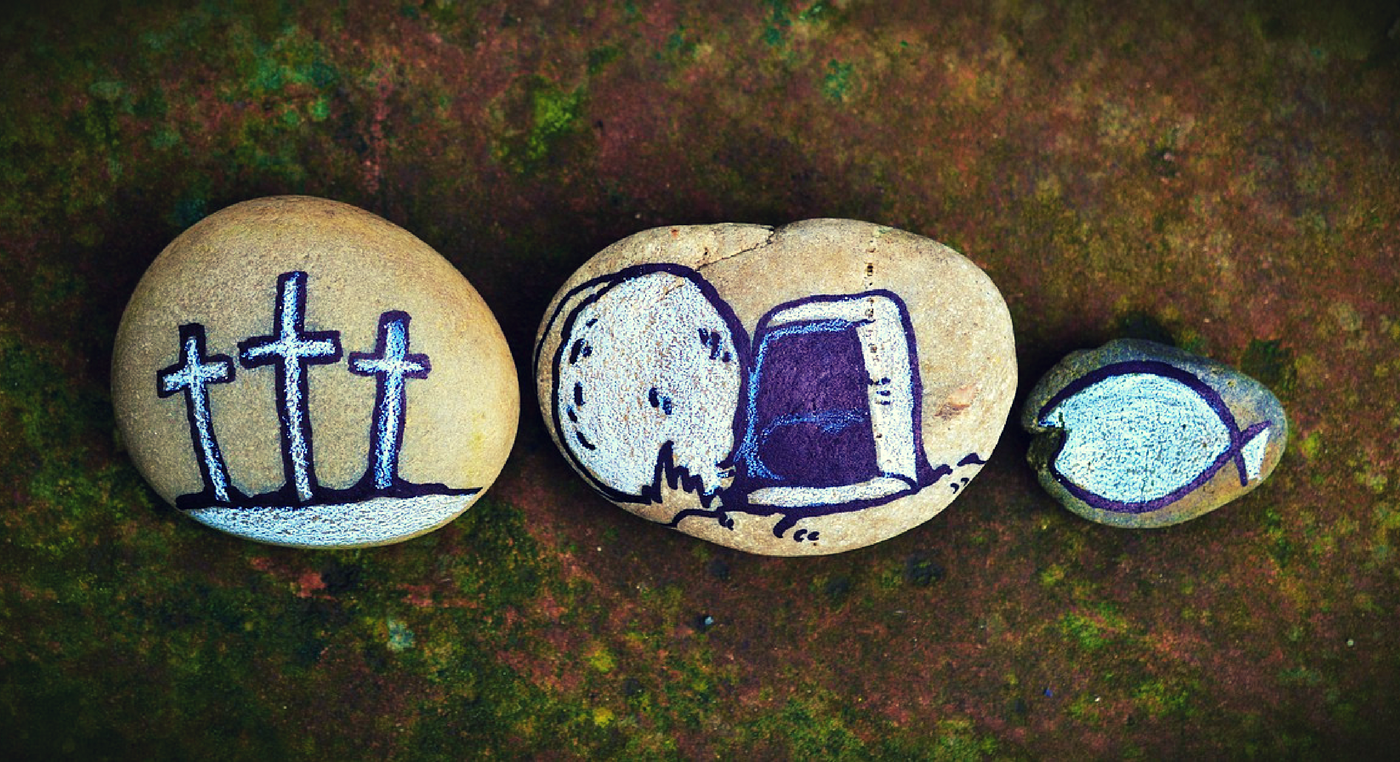 Everyone likes a good comeback story.

The Bible is full of them… a young boy who defeats a giant, a stuttering prophet who leads God’s people to the Promised Land, and the greatest story of them all… God’s Son who is put to death, but comes back to life!

Use this youth group lesson to teach teens that what looked like defeat to the world was actually Jesus winning the greatest victory.

Bottom Line: What looked like defeat to the world was actually Jesus winning the greatest victory.

Divide your group into two teams and line them up.

Set up a table on the other side of the room with a bowl of candy for each team.

Say: Today, we’re going to have a battle of the bunnies!

When I say, “Go,” the first person in line will put on the oven mitts and hop like a bunny over to the table with the candy.

They will unwrap one piece of candy and eat it before hopping back and passing the mitts on to the next person and sitting down.

The first team to unwrap all their candy and get their bunnies back to the line – wins!

Depending on how the game goes with your group, you may have a blowout victory, a back and forth battle, or come-from-behind upset.

Use whatever happened in the game as a springboard into the teaching time.

Say: You never know exactly what will happen in a game like that!

Even if you try to predict a winner, our best predictions can sometimes fall short.

No matter how big of a lead a team gets, we’ve learned in the sports world that you can never count an underdog out.

How many of you play sports, or are sports fans?

Over the past few years the world has witnessed some of the most incredible upsets in professional sports history.

You could ask your group to share some examples here, or you could list off some of these:

For example: “The Golden State Warriors blew a 3-1 against the Cleveland Cavaliers lead in the NBA Finals!”

“The Cleveland Indians blew a 3-1 against the Chicago Cubs lead in the World Series!”

“The Atlanta Falcons blew a 28-3 lead with 2 minutes left in the 3rd quarter of the Super Bowl against the New England Patriots!”

Did any of you watch those games?

Scores that for decades would have been seen as “sure things” and “insurmountable victories” came crumbling down, in unforgettable fashion, shocking fans in arenas, stadiums, and those watching around the world.

Even Mark Wahlberg – movie star and diehard New England Patriots fan – famously (or maybe infamously) left Super Bowl LI in the third quarter thinking there was no chance for Tom Brady and the Pats to come back against the Atlanta Falcons.

Wahlberg ended up missing one of the craziest endings to a football game in history.

Can you think of some other famous comeback stories?

Why do you think these stories become so famous and so memorable?

Perhaps, it’s because we relate to the greatest comeback of all time.

At Easter, we celebrate the comeback victory of Jesus.

But, do you know what sets Jesus’s comeback apart from those of the Patriots, the Cavs, and the Cubs.

What makes Jesus’s comeback unique is that it was the plan along.

In Matthew 27, Jesus is sentenced to die by Pilate, the Roman governor.

Though Pilate famously “washed his hands” of this death sentence, the plot to crucify Jesus had been in place long before this moment.

The Pharisees, religious leaders and government officials were angered and intimidated by the works and the words of Jesus long before this day.

We read throughout the gospels that they are constantly plotting ways to eliminate His powerful ministry through conspiring to murder Him, like in Mark 3:6.

Right after Jesus heals a man on the Sabbath, breaking a sacred religious law, we see that:

“At once the Pharisees went away and met with the supporters of Herod to kill Jesus.”

Jesus’ enemies thought by killing Him they could extinguish His power and His ministry.

And, why wouldn’t they?

After all, the world had never seen anyone comeback from that sort of deficit.

But, what looked like defeat for Jesus was actually His greatest victory.

In His death, Jesus was not succumbing to the plans of His enemies.

He was sacrificing Himself for the sins of the world.

He was willing to die so that those who followed Him could have eternal life.

There was nothing unexpected about Jesus overcoming death.

In Matthew 16:21, Jesus plainly explained to His disciples that it was necessary for Him to suffer and die at the hands of the religious leaders.

He also explained that even though He would be killed He would also rise from the dead 3 days later!

This was God’s plan.

Even though He spelled it out for His followers, there was still much agony and confusion in the moments after His crucifixion.

Despite His many warnings, the followers of Jesus believed His death to be an insurmountable defeat at the hands of the world.

Much like Mark Wahlberg walked away before the Super Bowl was over, Jesus’s disciple Peter ran away from the Lord during the crucifixion, denying he ever even knew Him.

But the cries of pain from Jesus’s followers would soon turn into tears of joy.

In John 20, we see Mary Magdalene visit the tomb of Jesus after His death and burial.

When she arrived, she found that the stone had been rolled away from the entrance.

Initially, Mary and some of Jesus’s disciples thought someone had stolen Jesus’s body.

However, Mary soon found out something even more incredible had happened.

What looked like defeat to Mary, to the disciples, and to all the world was actually the greatest victory of all.

Jesus was not dead.

But, Jesus did not escape death through some magic trick.

No, in fact, Jesus overcame death and rose from the grave in a comeback victory like the world had never seen!

There was no need for Mary to cry.

Instead Jesus commanded Mary to go share the good news.

He later commanded those that follow Him to share the good news as well and to go and make disciples of all the nations.

This is why we celebrate His miraculous “comeback” victory at Easter every year.

It’s the same reason why sports teams that win championships celebrate those victories forever – to remind their fans and followers of what is possible in the future because of what happened in the past.

Have you ever been to a college or professional sporting event?

Did you notice anything in the stadium that pointed to championships the team had won in the past?

Sports teams hang banners in their stadiums to tell the story of their victories to future generations.

Sometimes they display memorabilia or build statues to celebrate these historic wins. In fact, the New England Patriots took it one step further.

The Patriots reportedly took the “28-3” score they famously came back from at Super Bowl LI and turned it into a symbol of victory.

Their Super Bowl championship rings reportedly had 283 diamonds each in them – a symbolic nod to their unlikely upset.

In much the same way Christians have taken the cross – which once was a symbol of defeat – and turned it into a symbol of the miraculous victory of Jesus.

When we look to the cross at Easter, we must remember that the cross once was once a recognized symbol of death and defeat.

Jesus upended this and turned it into a symbol of victory.

This is why Christians celebrate the cross!

I want you to look at the scoreboard of your life right now.

Does it look like your opponent – the enemy, the world – is winning?

If so, then I need you to ask yourself a couple of questions: Is Jesus on your team?

If so, then you can know what He already knew as He was suffering on the cross: this is not the end!

If so, then you can look up to the championship banner and know that even though your opponent may look as if they have the upper hand, the game is already over.

The championship of eternity has already been won long ago.

Jesus has overcome the world!

What looks like losing to the world is actually victory in Christ.

What looks like defeat in your life is often just the setup for an incredible comeback by Jesus.

Remember this at Easter.

And remember it whenever you feel like you’re down in a hole you can’t come back from.

Don’t walk out on the game.

Remind yourself daily of His sacrifice and His comeback victory.

Remind yourself that if you surrender your life to Him then you are on the winning team!

Remember that even though the world thought they were winning, Jesus never had any doubts about the outcome.

And remember that He does not want you to have any doubt either.

Because as Jesus himself said even before He faced the cross in John 16:33:

“Here on earth you will have many trials and sorrows. But take heart, because I have overcome the world.”