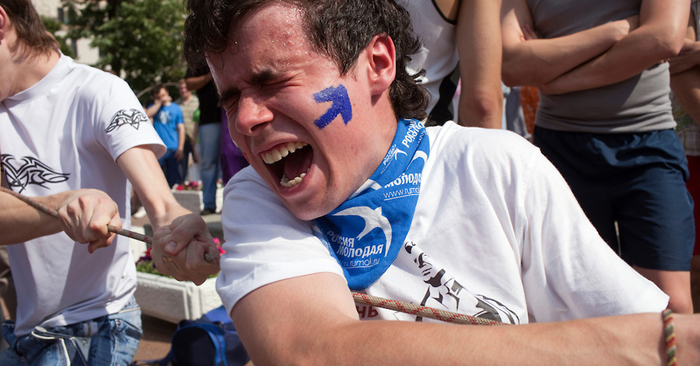 Goal: Play 4 Way Tug of War to illustrate what gossip does to relationships.

You could also play this as a “just for fun” game or icebreaker.

For those of you who want to go all out and make a really cool 4 Way Tug of War rope, then see the image below. However, zip ties will work just fine.

If you want to kick up the “craziness factor”, use these supplies. This option is best suited for a youth group camp, retreat or event.

Purchase and cut (if needed) the rope. For ever 12 players create an “X” with two pieces of rope. In the middle, where the “X” intersects, use zip ties to secure the two pieces of rope together. Make sure it is tight.

The size of your youth group will determine how many you create beforehand. Players will rotate, so plan on to make one “X” for every 12 players. Four players at a time will use the “X”. So, one “X” gives a group of 4 a chance to play once in three rounds.

Make a line on the ground with the blue tape, marking the “no step” zone. Once players go over that line, they lose.

For larger groups, you can have several groups of four competing at the same time.

If using the “optional” method, then it’s best to play outside on the grass or other soft surface.

Place plastic sheeting on the ground.

Squirt maple syrup (or a mix of other messy items) in the middle of the plastic sheeting. Once players hit the messy stuff, they lose.

Have several leaders ready to help facilitate and judge the different tug of war matches.

Have your group of students break up into teams of four.

Tell them to team up with friends as much as possible.

Have each team of four compete in a match of 4 Way Tug of War. One player at the end of each rope.

The “X” creates a unique amount of tension…much more fun than traditional tug of war.

Once both players cross the marked line, they lose.

For each group of four, there is one winner. The winner is the one left after dragging all the other players across the line.

Play tournament style, with the winner of each match competing against other winners…until there is one ultimate winner.

Play as many rounds as time allows.

Play the same game as described above, but put messy items (maple syrup, chocolate syrup, whipped cream, etc) in the middle of the playing area.

Hose off students after the game.

After the game, say: Believe it or not, this game can teach us something about gossip.

Gossip has a way of pulling you in the wrong direction.

Ask: How do you think this game is like “gossip”?

Like this game? View this fun Youth Group Game – Deathball